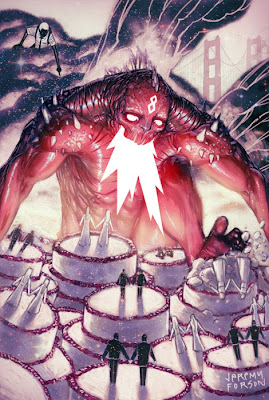 I’ve been wanting to do an illustration about Prop. 8, California’s constitutional ban on same sex marriage, for some time now, but I was too busy working on other projects. I’ve left my company, amicably, and I’m now working on a new portfolio, and looking for work. It feels great to be doing personal pieces again 🙂

Over the summer I was working on NDA projects that have yet to be released, and it helped me to take a break from gallery work and illustration, and get some perspective on what I’ve been doing. Sometimes (in whatever you’re doing) you can hit a wall, and it helps to take a break and come back to it. I don’t know the exact science of why it helps, but it seems like your mind needs time off to make new neural connections. Now that I’m back at it, I feel as if I “leveled up” and it’s amazing! When I’m drawing, it seems like I’m not moving the pencil, it’s just doing what I’m thinking. Spooky. One direction I did not expect to be heading in was digital. I guess that the computer has been playing an increasingly larger role in my picture making over the last year or so, but after doing the Zombie self-portrait, and now this, I’ve become a digital convert. I can’t imagine what this piece would be like if I tried to paint it, not to mention how long it would have taken. I’m in love with the speed and flexibility of working digitally, and for mostly practical reasons I expect to continue in this direction. I feel that I did a pretty good job of bringing my painting style into the digital realm, but I’d like some feedback on that. I’m showing some new influences as well. Since I got an iPhone, I’ve been digging vintage photography apps, and you can see that I applied a cross-process look to this illustration.

I really wanted to do an opinion illustration about this subject for a couple reasons. I haven’t seen any illustrations about it, and it’s an issue I feel strongly about. I think Barron Storey would say that’s exactly the kinds of things you need to illustrate.

If you don’t know, there’s a big deal about gay marriage right now, duh. What you might not ave heard is that the Mormon church has put vast sums of money into banning gay marriage in California, which is why there’s a little Mormon guy in the corner. This idea started off being humorous, a rampaging prop 8 monster destroying a city of gay wedding cakes, and in the beginning the monster was kinda silly looking, like a Japanese vinyl toy or something, but conceptually that bothered me. I didn’t want prop. 8 to be cute or funny at all, because that’s not how I feel about it, I wanted it to look as scary as possible. We’re dealing with bigotry made into law after all. What I’ve ended up with is a mix of humor and horror that I had a lot of fun making.