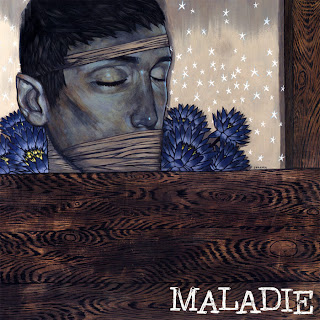 This is a record cover for a Mexican hardcore band called Maladie It’s got an Egyptian Death theme. Mummy, blue lotus, stars of the underworld. Good times. I got to do whatever I wanted on this one, and that’s the way I like it. They did some of their own changes after passing it off, but I’m showing it the way I intended it to look. This is probably going to be my last record cover, at least for a while. I’ve finally finished all the covers I had committed to doing, and I don’t want to do them anymore. They are labor intensive, and I don’t get paid hardly anything to do them. If I got a decent offer to do one for a large label or something, that’s a different story, but for what I’m making now it’s just not worth the time and stress. I’m supposed to work on some drawings to go in the layout of a record cover, but that’s a bit of a different beast.

I’m not sure where my next move will be. I have some editorial illustrations coming up, but if you haven’t noticed, illustrations in magazines are waaayyy down. I don’t think it’s realistic to try to squeeze a living out of those alone. Possibly comics, or concept art. Maybe I’ll hunker down in a master’s program until the economic shit storm blows over. We’ll see.