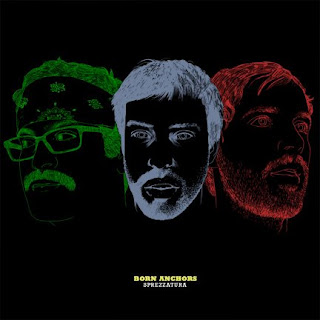 I worked on a CD cover for Born Anchors. It never really made it to completion, so this is it’s last manifestation. The colors, concept, and type are not mine. This is kind of a sad job for me. I like the guys in the band, and the music, and I wish that the concept they wanted had worked out, but it didn’t. I was not creatively active on this assignment, my role was more of “the hand.” I just drew whatever the guy I was working with wanted and didn’t really participate in the concept or anything. The comics style portraits I did on my own at one time in the process, they might become buttons. I like them a lot, even though they’re certainly a departure for me. I’ve been playing around with a lot of different styles lately, and the projects that I’ve been conceptualizing have been all over the map. This was when I was thinking a lot about developing a comic book style. I’ll be the first to admit a strong influence from Jamie Hewlett (Tank Girl, Gorillaz). Fun though. But yeah, the cover, not so much. I’m not sure where it went wrong, but it surely did.